The Criticism of Some Evaluation and Assertion About Isrāʾīliyyāt in Tafsīr

The traditions about isrāʾīliyyāt that were seen almost in all the types of Islamic sciences appeared in the sources of tafsīr from early periods. These traditions that were generally used to explain the Qurʾān were seen problem and critisized by some exegetical specialists. Even though corresponding to a relative later period in the classical era, an approach was tried to put forward in view of the traditions about isrāʾīliyyāt. This methodological concern for isrāʾīliyyāt in classical period has increased and been influential for many researchers from east and west to work on this issue in modern times. There has been reached to important results about the issues of the definition of isrāʾīliyyāt, the source of it, its spread in Islamic sciences, its aim of usage, the progress of these positive-negative attitudes against these traditions in historical process. But it is important to discuss some evaluations and analysis again that put forward in this process when different cases about the issue are taken into consideration. According to this, a series of problem, such as how the isrāʾīliyyāt can be defined in tafsīr, when the criticism of isrāʾīliyyāt started, whether Biqāʿī was the first exegete who made reference to Bible or not will be discussed considering relevant resources in this article.

Summary: Since the early periods, isrā’īliyyāt narratives were used as a source of information in tafsīrs. These narratives, which are transmitted in various tafsīrs of the Qur’ān, one of the main sources of Islamic religion, have also taken the methodological interests of some exegete since the early periods. This interest continued in the modern period, and both Western and Eastern researchers made research on isrā’īliyyāt. Some of the findings, analyses, and claims available in researches on this subject will be reexamined in this article.

The first of these is the problem of the definition of isrā’īliyyāt. In contemporary research, inclusive definitions are made for isrā’īliyyāt, seen in all sources. These definitions do not allow for a refined description of isrā’īliyyāt which is handled in terms of different intentions in the sources of each different field and which varies in terms of the issues it covers, leading to the underestimation of some of its aspects in relevant fields. In the definitions, it is stated that isrā’īliyyāt is mostly learned from the Ahl al-Kitāb, (the People of the Book) it became widespread along with Islām and it included narratives about caliphs, dynasties, and Mahdī, as well. Another issue is to be emphasized that they are fictive or mythological. In classical tafsīrs, isrā’īliyyāt is observed to be related mainly with the history of the Ahl al-Kitāb or with the subjects they know about. In the modern era, the narratives about the ancestors of the Arabs have been identified as isrā’īliyyāt. If some of the isrā’īliyyāt narratives are related to the history of Arabs, then their resource should be the historical-cultural memory of Arabs. However, as almost all Qur’ānic stories were somewhat known before the revelation period and relations with the Ahl al-Kitāb dated back to times long before the Islamic period, the claim that these narratives became widespread along with Islām should be revised. It is also problematic to emphasize the legendary nature of some of the isrā’īliyyāt and to make that as a reason to reject all. Such emphasis also leads to the underestimation of the functions of narratives in tafsīrs. In isrā’īliyyāt, tafsīr was used for i) interpreting the ambiguous words in the stories, ii) to bring evidence to the Ahl al-Kitāb, and ii) tarhīb-targhīb (encouragement-warning). These narratives can be used as a source in tafsīr unless they are explicitly falsified by the data of fields such as history, history of religions and archaeology as well as the Qur’ān and the true Sunnah.

The understanding that "the expression in the story is sufficient, it is unnecessary to deal with the ambiguities; instead, it is necessary to deal with the lesson and wisdom in the story" is one of the criteria that Muḥammad ‘Abduh (d. 1905), who is deemed to be the pioneer of the strict criticism of isrā’īliyyāt in the modern period, took as basis in this criticism, is valid for the exegete of the classical period, as well. Although exegete, such as al-Ṭabarī (d. 310/923), al-Māturīdī, al-Rāzī (d. 606/1210), and Abū Ḥayyān (d. 745/1344) who had this understanding, gave place to isrā’īliyyāt, these people recognized that "these narratives were not final, binding or necessary”, indeed. The understanding that such expression in the story is sufficient, which is one of the reasons for such awareness in the classical period, seems to have turned into a strict rejection in the modern period.

Another issue is the claim that Biqā‘ī (d. 885/1480) was the first exegete to systematically benefit from the Bible in tafsīr in the classical period. However, al-Daylamī (d. 593/1197) before Biqā‘ī, is also observed to have used the Old Testament systematically in tafsīr. He cited the Tanakh in his period in two ways. He either directly quoted from the translation of Tanakh or the Hebrew text written in Arabic letters. Another exegete who used the Tanakh as a source in his tafsīr was al-Ṣafadī (d. 696/1296). He enriched his tafsīr with systematic quotations from the Tanakh. Therefore, the use of the Bible as a source of interpretation in the classical period should not be started with Biqā‘ī.

The reason why the pioneer exegete of the classical period did not directly use the Bible is claimed to be the fact that they falsified it and deemed the isrā’īliyyāt narrated from the predecessors to be more reliable. However, it is known that a significant portion of the isrā’īliyyāt, which was orally transferred from the predecessors, is based on written sources, particularly including the apocryphal texts. So just like the Bible, isrā’īliyyāt, which was orally transferred from the predecessors, is problematic in terms of authenticity. This allows us to argue that classical exegete have an inconsistent attitude, indeed. On the other hand, when we take into account the fact that classical exegetes criticize these narratives from time to time and believe that they are not final or binding, the problem of potential inconsistency disappears. Accordingly, they did not deem chain transmission of these narratives from the predecessors by reliable transmitters to be a sufficient reason for their acceptance and adoption for good and all. 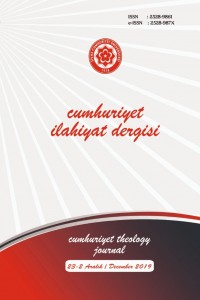