Is The Good Indefinable? J. S. Mill’s Proof and The Criticism of The Naturalistic Fallacy of G.E. Moore

Abstract: John Stuart Mill, one of the most prominent thinkers of Utilitarianism, has provided a proof in his book Utilitarianism for the principle of utility underlying his ethical theory. According to many thinkers, George Edward Moore is one of them, this proof is problematic in many aspects. Moore argues that Mill has made a mistake called the naturalistic fallacy in his proof. The Naturalistic fallacy is based on the claim that the good is indefinable. Moore argues that Mill has defined the good as desirable so he has made a naturalistic fallacy in his proof. This criticism and the responses given by the thinkers constitute the subject of this article. The main argument put forward in the article is that Moore is not right in his criticism.

Summary: Jeremy Bentham and John Stuart Mill are the most important philosophers in the classical utilitarian tradition. There is usually a consensus between these two important thinkers on many issues related to the principle of utility. However there are also some points which they do not agree with each other. The proof of the principle of utility can be considered as one of them. What is meant by the principle of utility is the principle which approves or disapproves of every action whatsoever, according to the tendency which it appears to have to augment or diminish the happiness of the party whose interest is in question. On the principle of utility, Bentham argues that this principle is the ultimate ethical principle and it is not susceptible of any direct proof, since a chain of proofs must begin somewhere. Yet Mill is not agree with him on this point. In contrast to Bentham, he claims that this principle can be proved and he has provided a proof in the fourth chapter of Utilitarianism, his one of the most famous books. With this proof, Mill submits three propositions:

(i) Happiness is desirable.

(ii) The general happiness is desirable.

(iii) The only thing desirable is happiness.

Having stated that these three propositions are considered problematic in many aspects by some commentators, what we shall discuss in this paper will be the first proposition. George Edward Moore is one of the most eminent philosophers who think that this proposition is problematic. He accuses Mill of making a mistake about the goodness called as a naturalistic fallacy in his famous book, Principia Ethica. The naturalistic fallacy is based on the claim that the good is indefinable. For Moore, Mill has identified the concept of the good as desired and then has argued that the pleasure is desired and finally has reached the conclusion that the good is pleasure in his proof. However according to Moore, notions are divided into simple and complex and only the complex ones can be definable. The good is not a complex notion, it is a simple notion and so it cannot be definable. In addition to this, Moore thinks that there is “is-ought problem” which implies that it cannot be derived an “ought” from “is”, in Mill’s proof.  Hence, Mill claims that the good is desired on the basis of desirable.

In accordance with many other thinkers we also think that Moore is not right about his accusation. There are several reasons for our claim. But before discussing those reasons, we have to make clear that Moore is right about his is-ought problem. Indeed, Mill has made the mistake by saying that the pleasure is good. For the pleasure is a factual concept (about what is) and the good is a normative one (about what ought to be). So if we describe the pleasure with the good, it means that we simply derive ought from is, namely we make the mistake called “is-ought problem”.

(i) Pleasure is sought by all men.

(ii) What is sought by all men is good.

Secondly, Mill’s aim is not to define the good, if he aimed to do so then he would be more careful, since an acceptable definition should not lead to any open question. Namely as Roger Crisp has stated, once the definition is made, there should be no need to ask any further questions about it. For example, when we define the triangle as a plane figure bounded by three straight sides our definition has succeeded because there is not any open question whether triangles are plane figures bounded by three straight sides or not. But the definition of the good as the desired does not provide the necessary conditions for a strict definition. For there is an open question whether what is desired is good or not. And the last reason is that, as Necip Fikri Alican has stated, Moore has commented on Mill’s proof in a wrong way, especially the analogy between the concepts of visible, audible and desirable. In this analogy Mill does not argue that desirable means what is ought to be desired but it means what is able to be desired. But Moore accepts that Mill has used desirable in the first sense. Therefore he thinks that Mill has defined the good as the desired. There is something that needs to be expressed here. Mill’s proof is problematic and this leads to misunderstandings. Hence this problematic aspect of the argument also has an important role in Moore's misinterpretation of Mill's proof.

In conclusion, according to our opinion, due to the fact that Moore was not able to understand Mill’s proof properly he has accused Mill of making naturalistic fallacy in his proof, yet his accusation is not valid.

Mill, Moore, Utilitarianism, the Principle of Utility, the Naturalistic Fallacy 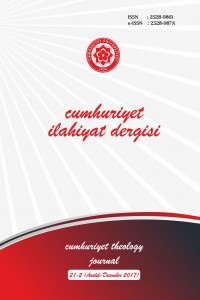