The Synoptic Problem is a puzzle that scholars have desired to solve since the 18th century. The discussion has a religious background, because it is about the first three canonical Gospels of the Church, namely Matthew, Mark and Luke, which came to be called the Synoptic Gospels. The discussion, in the most basic context, concentrates on the point that there is a possible relationship or connection between the Synoptic Gospels and that each one is substantially similar to another but at the same time includes different aspects. This theoretical discussion separates the Gospel of John from the Synoptic Gospels and does not see it as a main source for the history of Jesus. The method of discussion is based on the reading of the Synoptic Gospels from a birds-eye-view, as seen together, and as comparatively in relation to each other. The aim of the discussion is to reach accurate historical information about Jesus and the birth of Christianity by analyzing the possible relationship between the Synoptic Gospels through their sources. Several hypotheses have been proposed for the solution of the Synoptic Problem. However, all the modern studies in the context of the problem are carried out by Western scholars. In other words, Synoptic Problem is a relatively unknown subject in the Turkish academic circles. So in this paper the aim is to draw the attention of the Turkish academy to the substance and framework of the Synoptic Problem through an introductory survey. In addition, some results that can be reached in this context will be exemplified by getting help from the redaction criticism.

The traditional four Gospels have been debated since ancient times. There have been many dimensions of these discussions. However, whether the Gospels contain contradictory information or not has always been at the forefront. Pagan writers, such as Celsus or Porphyry, criticized the Gospels in this respect. Christian writers, such as Marcion or Tatian who lived in the second century when the Gospels were not seen as canon yet, raised some suggestions based on the doubts that the Gospels were incompatible with the Jewish scriptures and contained contradictions among themselves. Marcion included a single Gospel that was close to the Gospel of Luke in his New Testament canon. Tatian made a mixed version of the four Gospels. In the next stage, the contradictions in the Gospels were explained by the Christian writers, such as Origenes or Augustine. However, the four Gospels were more prominent in this new era and they were regarded as canons by the Church. Therefore, the Christian writers’  approach to the Gospels also began to change. Origen emphasized allegorical interpretation which had been known since the Jewish philosopher Philo (d. 50) in Alexandria. Thus, he wanted to protect the contradictory texts from being seen as the source of the problem. He argued that the problem was the human mind that could not grasp the allegorical mystery of the text or the narrative in the text. Augustine had a similar approach with the suggestion that the Gospels should be read by a faithful heart. According to Augustine, it is natural that the Gospels reflect different characters because the Gospel writers describe Christ differently. In order to be able to comprehend the divine meaning in these texts, the Gospels must be read in a spiritual mood. After all, all these Christian writers aimed to respond to the criticism by the pagan writers regarding the Gospels, as well as the current suspicions in the minds of Christians.

Origen was the first Christian thinker to devote an effort to solve the debates on the Gospels in a logical and systematic way. As for Augustine, he was the starting point of the Synoptic Problem since Augustine was the first to mention the links between the Gospels texts, namely the idea that the authors of the Gospels may have used each other as sources. However, in the modern sense, the Synoptic Problem has been transformed into an academic discipline by the intellectuals who followed the path of Enlightenment thinkers, such as Reimarus (1684-1768), Lessing (1729-1781), Griesbach (1745-1812), and Eichhorn (1752-1827). Because modern researchers differ from old writers based on Church ideologies, they began to demolish traditional beliefs about the Gospels. Thus, the effort to harmonize incompatible narratives in the Gospels is left aside. Indeed, the ancient writers put a lot of effort into it. Now, in the places where indirect relations can be established between the Gospels, the idea of finding the common hypothetical sources of these Gospels is prominent. The claim that the Gospels were directly connected to Jesus as a historical figure has been gradually faded away.

The basis of the Synoptic Problem is the comparative reading of the Synoptic Gospels. In the modern sense, this comparison and its interpretation was made by J. J. Griesbach (1745-1812) for the first time. Griesbach was the first scholar to compare Matthew, Mark, and Luke in a way to create a synopsis. His comparison is based on a reading done by placing several passages or narratives from the Gospels side by side.

The writers of the Gospels wrote their own texts by using written and oral sources. One of the scholarly methods is the redaction criticism that explores how the Gospel writers shaped the old literary documents by arranging, re-shaping, and revising them. This theory looks at whether the source used by an author is known and available today in order to understand whether how the author used his sources would provide important clues about his tendencies or ideologies. In this regard, the theory of the Marcan priority can be rendered functional along with the redaction criticism. In doing so, it is possible to reach important conclusions about Jesus and the birth of Christianity, as well as the theological and ideological ideas of the unknown authors of the Gospels of Matthew and Luke. First of all, the authors of Matthew and Luke used Mark’s text as their sources. Secondly, we have these three Gospels today. And finally, the ways in which the writers of Matthew and Luke shaped the text, phrases, or expressions of Mark reveal important results about their thoughts.

The analysis shows that the authors of Matthew and Luke sometimes made additons that could be called interpolation to Mark’s text; sometimes they wanted to censor some statements in Mark; sometimes they tried to explain or clarify some statements in the Mark, or sometimes they tried to blur clear expressions and expositions in Mark's text. These authors did not do such things without a reason. They wanted to reshape Mark’s text in accordance with their theological understanding of Jesus as Christ. In this context, according to some expressions in Mark, Jesus' power had a limit. The authors of Matthew and Luke did not find these statements appropriate, because they changed Mark’s some statements to create an impression that Jesus’ power was not limited. This proves that the authors of Matthew and Luke re-arranged their resources to present Jesus as a superhuman being. Similarly, in Mark, there are lines in which Jesus declares his loyalty and servitude to the God of Israel. In such passages, he presented his personality in a low Christology context against God. However, the authors of Matthew and Luke were disturbed by such statements, because they intervened in these statements in Mark. They wanted to change some of the meanings and contexts in Mark’s text through such interventions and presented Jesus as Christ in a high Christological context to their readers. In the end, all these researches also responded to the question of to what extent the Gospels provide reliable information on a historical basis. 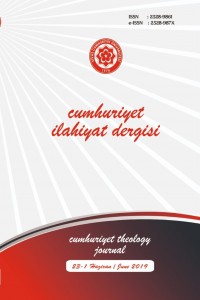